Motor Enthusiast gets unexpected motor show, in his bedroom!

Great story from America which could have been tragic! 71 year old Terry Brouillette was asleep in his bed at 2.30AM when a drunk driver in a Subaru Legacy came crashing through his wall and into his bedroom coming to a halt  as it ploughed into the second the second wall. The car stopped, literally hanging over Terry Brouillette’s in his bed, only inches away from him, miraculously he wasnt injured.

Whilst Terry may well have lost his bedroom wall, and a lot of sleep, he didn’t lose his sense of humour as he joked his way through the interview he gave a local news channel. When you see the guys room you are struck by they fact that it looks a little bit like it might the room  of a child; there are model cars stacked on the  wall, sporty bed sheets and posters of racing cars on the wall (we’re guessing he’s a NASCAR fan), so obviously the man has respect for extreme driving. He actually seems quite happy about the whole situation, recounting the events with a huge grin on his face. 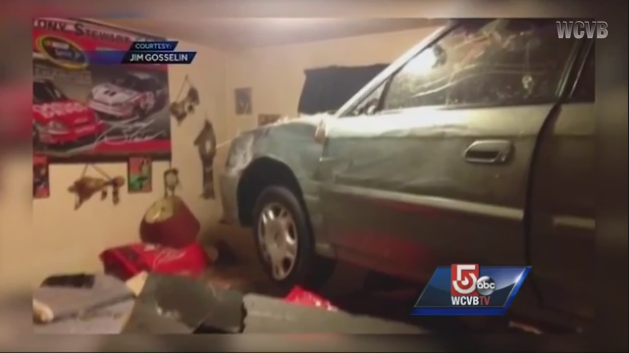 I guess you have to be a little happy knowing you escaped a potentially fatal situation with only minor injuries. The woman driving the car was found to be drunk, she was posted a $1500 bail and has had her license suspended.